Palestinians in the West Bank are under an Israeli-imposed curfew for the Jewish holiday of Passover, beginning at 4 P.M. and continuing until 4/17. Crossings between Gaza and Israel are closed. (HA 4/14; HA 4/15; HA 4/16)

At a Passover seder hosted by U.S. vice president Kamala Harris and 2nd gentleman Doug Emhoff, the couple served wine made by the settler winery Psagot Winery in the West Bank. The senior advisor for communications to Vice President Harris said in a tweet that “the wine served at the Seder was in no way intended to be an expression of policy.” (HA, MDW 4/17; MEE 3/18) 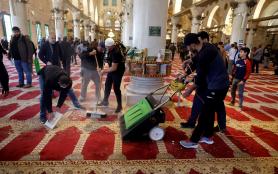