In the West Bank, 1 Israeli soldier was lightly injured with a shot to his hand during a late-night raid in Bruqin. Israeli forces shot and injured 1 Palestinian during a raid in Aida refugee camp. Israeli forces also razed 4 dunams (1 acre) of land planted with olive trees in as-Samu. 18 Palestinians were arrested during late-night raids in Hebron, Jenin, Silwad, and Nablus. In Tel Aviv, Israeli employees of Israel Railways denied an Israeli woman entry to the train platform because she was wearing a t-shirt from the organization Looking the Occupation in the Eye. (JP, TOI, WAFA, WAFA, WAFA 8/25; HA 8/28; PCHR 9/1; UNOCHA 9/2)

The Israeli state prosecutor closed an investigation into the killing of 1 Palestinian man who was stabbed to death by an Israeli settler on 6/21 at a settlement outpost outside of the Ariel settlement, claiming that the settler could have acted in self-defense. (HA 8/25; AJ, MEMO 8/26)

PA representative to the UN Riyad Mansour told reporters that his team is having talks with members of the UN security council about renewing the PA bid for full membership at the UN. (MEE 8/26; AX 9/7)

UNRWA commissioner-general Philippe Lazzarini told the UN security council that the UNRWA is facing an existential threat given its chronic underfunding and coordinated attacks to delegitimize the agency. (MEE 8/26) 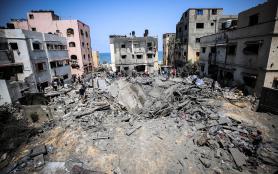