An Israeli court suspended the forced eviction of the Salem family in Sheikh Jarrah, postponing it due to Israeli police’s concern that the eviction could cause violence, as it was scheduled to coincide with the start of Ramadan. The court also ruled that the Salem family will have to deposit $7,700 to the court as a guarantee. (ALM, HA, MEMO, WAFA 2/22; HA, MEE 2/23) 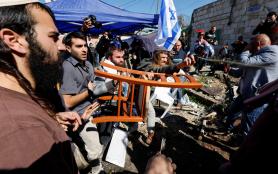