Israeli Palestinian Bedouins protested outside of the official residence of Israeli prime minister Naftali Bennett against neglect of the Bedouin communities in Israel and the Jewish National Fund’s displacement by forestation project. The protesters also demanded that Israel release all people detained during the protests in the Naqab against the forestation project. The protest was organized by the Higher Arab Monitoring Committee and the National Council for Arab Mayors. Palestinians also demonstrated outside of the Jerusalem municipality building against demolitions in East Jerusalem. (HA, WAFA 1/30)

The PFLP reaffirmed that it will not participate in the upcoming PNC meetings, citing fears that the meetings will deepen the divide amongst Palestinian parties. (MEMO 1/31)

Israeli media reported that PA president Mahmoud Abbas asked Israeli defense minister Benny Gantz to release 25 Palestinian prisoners during their meeting at Gantz’s home on 12/28/2021. The reporting said that the 25 prisoners have been detained before 1993 but did not name who President Abbas was asking to have released. Gantz, reportedly, did not give Abbas a firm answer on whether he would help with the request. (TOI, WAFA 1/30; MEMO 1/31) 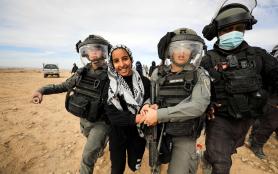