The Israeli cities of Netanya, Ramle, Holon, and Givatayim suspended construction and gardening work at public schools in an apparent effort to limit work by Palestinian laborers. Ramat Gan’s mayor also told building contractors in the city to end work on sites that “rely on Arab labor.” In addition, the Israeli military banned the entry of Palestinian workers into Israeli settlements. The restrictions on Palestinian workers come as 3 different attacks were carried out in Israel over the past week, including 2 by Palestinian citizens of Israel and 1 by a Palestinian from the West Bank. (HA 3/30)

Israel’s security cabinet decided to revoke work permits for relatives of Palestinians who have attacked Israelis and pushed forward a plan to reinforce the separation barrier. Israeli police also asked the security cabinet to limit access to the Haram al-Sharif compound to Muslim worshippers 60 and older—a request the security cabinet did not immediately respond to. Prime minister Naftali Bennett also called on all licensed Israelis to start carrying a weapon. (HA 3/30; HA, HA 3/31)

Prime Minister Bennett spoke with U.S. president Joe Biden, who offered his condolences after 11 people have been killed in attacks in Israel in the past week. (HA 3/31) 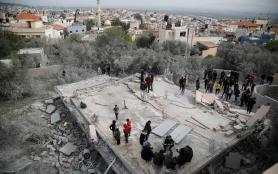